I’ve been pondering the motivations of voters who rally around each of the candidates, as have most of the wonks in Washington. 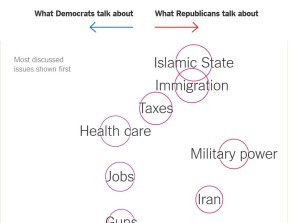 An article in the NY Times examined the things candidates talk about in the debates and presents a  chart to illustrate the relative frequency each topic gets discussed.  Take a moment and click on this link so you can see the whole graphic: Which Issues Each Party Debates, or Ignores.

If you were asked to place the issues on the chart without seeing the article, I suspect you could replicate it by making the left side “visionary” issues and the right side “fearful” issues. I suppose I should not be surprised.  Those who ardently believe that government should be smaller and do less, find it hard to come up with positive ideas for action that will muster voter support. Fear is powerful substitute for vision.

The GOP has incited fear very effectively to manipulate elections. Newt Gingrich at the January 24, 2015 Conservative Freedom Summit set the stage for the present campaign with a veritable catalog of fear triggers the GOP could use.

For those who see the nation as a community that looks out for one-another aided by government, big ideas and grand visions abound. Bernie Sanders, the democratic socialist, is widely faulted for espousing issues and ideas that are unworkable and might wreck the economy if attempted. Hillary Clinton is accused of being too pragmatic, and practicing the tepid politics of the possible.

Trump’s authoritarian anti-establishment posturing plays to fears and resentments under a banner of “Make America Great Again,” an undefined goal that calls forth the sentiment that the establishment has disregarded and disrespected Americans with 1950’s values and sensibilities.  It’s not so much a vision as a retro-fantasy about how things were once better.

In a commentary in today’s NY Times Jacob Hacker and Paul Pierson argue that Hillary actually is visionary.

Mrs. Clinton has put forth an ambitious and broadly popular policy agenda: family and medical leave, continued financial reform, improvements in the Affordable Care Act, investments in infrastructure and scientific research, measures to tackle global warming and improve air and water quality, and so on.

But voters and pundits alike complain that she’s a cold-eyed realist who hasn’t articulated what George H. W. Bush once wistfully referred to as “the vision thing.” Instead, it’s Bernie Sanders who has been cast as the visionary in the Democratic contest, an idealist brimming with inspiring (if often unrealistic) proposals.

The bulk of the article makes the historical case for government’s role in out national prosperity and individual well-being. It’s more about how the current political discourse ignores the facts of our past. In effect it implies that Hillary actually has the key to making America great, but keeps it hidden.

Our nation badly needs a dialogue that reminds Americans why a capable government is essential and how much we are paying for its erosion. Mrs. Clinton understands this, but she may have neither the opportunity nor the inclination to say it.

I think the authors are on to something.

One thought on “It’s about Vision and Fear”