A couple of days ago this photo showed up on my Facebook timeline. 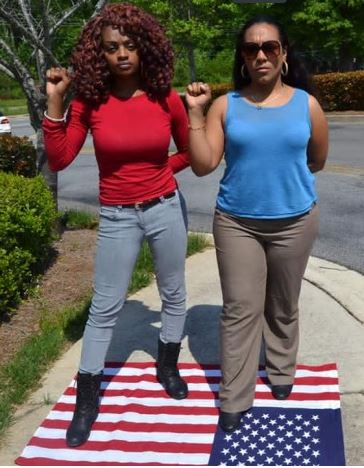 I’m a Navy Vet and, frankly, I’m offended by such disrespect of the US Flag. My first reaction was seething outrage at the two women. When I read the caption, it said something like “take back their welfare checks.”

Hmmm.  Is it fake news?  I know it very easy to create such photos in Photoshop. The women are giving the clenched fist black power salute. Are they celebrities?  What exactly is the message the sender wants me to get?

I did a Google search for “two black women standing on flag” and up popped a story from the Ocala Post published more than a year ago It’s November 2016 as I write this  and the article appeared in May 2015 — hardly breaking news.

The clear purpose of this racially charged post is to foster anger at black Americans. It is not about the two women shown, both of whom have been punished in connection with the incident according to the article.  No, the intent of the social media post of the photo is make old white men hate angry young blacks.

The women were students, not on welfare as the Facebook post implied. Whatever they were protesting when they made the Youtube video of themselves is not mentioned and doesn’t matter for the purpose of the post. The picture and its caption are designed to trigger outrage and direct it at all blacks  and especially black activists.

If you get something like this, and you are outraged, and you re-post it YOU ARE BEING PLAYED for a sucker in the political propaganda game. The people who create and post items like this are exploiting an ugly aspect of social media. Crafty people spread this poison for political ends. It’s cheap to do and, sadly, all too many of us are not skeptical enough to see the game and refuse to play.