Some people see an injustice in our tax system because they see it as stealing from the rich and giving to the poor. They resent “Confiscatory” taxes — those they pay for the benefit of others that they don’t think they should be forced to subsidize.  They resent public spending on welfare of all kinds: unemployment benefits, public education, parks and recreation, … it’s a long list.

Libertarians are often the most outspoken critics. And the GOP, enabled by the Trump administration, is likely to savagely gut existing programs.  The American Dream is predicated on a healthy work ethic.  Hard work, thrift, and personal sacrifice in the early lean years are rewarded by abundance and leisure later on.

Here are two examples of viral emails that attack what the anonymous originators call the liberal welfare mentality. 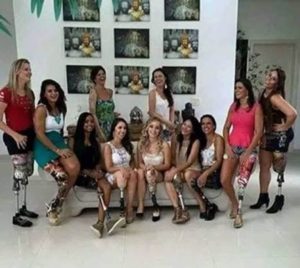 We see lots of pictures of wounded male veterans but women vets get wounded and maimed too. You  may need to take a second, closer look though.  The first thing I saw was a bunch of beautiful smiles. Study this picture again. Let the story it tells sink in.

These women and many others, as well as their male comrades, paid  this price for our freedoms.

And they did it for less than what welfare recipients are paid!!!

There is more patriotism and class in those 11 ladies pictured than the majority of Congress.  And a Heck of a lot more than those over-paid athletes who choose to “take a knee” when the National Anthem is played!!!!

Is your skepticism triggered? It should be.  The things that set off my BS alarm were: anonymous, use of Caps, numerous exclamation points, unsupported assertions, and the lack of connection between the photo and the target concern: welfare.

I have not fact-checked the assertion, but I sure that our military are paid more than welfare recipients. I can’t say whether “the majority of Congress” are patriotic – but it’s fair to assume that they are not purple-heart patriots. But what’s that got to do with welfare? I think we are supposed to infer that Congress confers welfare payments gratuitously on the undeserving while neglecting wounded vets. Again, no data, just a naked assertion in a context of outrage.

Finally, there is the reference to Athletes (mostly Black) who protest unequal justice by kneeling during the national anthem. If I held the stereotype that most blacks receive undeserved welfare, and some are grossly overpaid as athletes … if that were my mindset, then seeing one of them protest by not placing a hand or hat over his or her heart during the National Anthem would perhaps fill me with self-righteous fury.

So the objective of this viral piece is to trigger moral outrage at minority welfare beneficiaries?  Sure seems like it.

Subject: MAKES YOU THINK.
A good friend sent this to me, and it makes perfect sense.  I am really happy that we live in a less and less free, but still a capitalist society. It’s what makes these sorts of things possible. 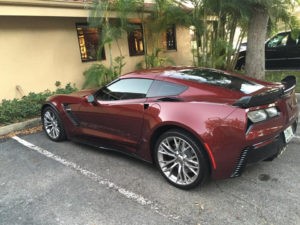 That is the difference between capitalism and a welfare mentality. When you buy something, you put money in people’s pockets, and give them dignity for their skills.  When you give someone something for nothing, you rob them of their dignity and self worth.

Capitalism is freely giving your money in exchange for something of value.  Socialism is taking your money against your will and shoving something down your throat that you never asked for.

I’ve decided I can’t be politically correct anymore. (I never was, actually)

This is actually more straightforward, but it still sets off alarms.  Like the first it is anonymous.  The very first sentence doesn’t make logical sense. “I am really happy that we live in a less and less free, but still a capitalist society. It’s what makes these sorts of things possible.”

Capitalism may indeed make owning a Corvette more possible than, say, living in communist Cuba. But what does that have to do with being less and less free?

A Corvette is a luxury, and exciting fun is certainly our motivation for owning one, not simply getting from point “A” to point “B”.  By raising the question of how many might have been fed with money spent on this extravagant car, the writer sets up a reminder that people get paid to produce what we buy. Consumerism benefits many in a capitalist economy.

That is how our consumer economy works.  People get paid for their labor, knowledge, and talent.

The well-documented fact that productivity has made steady gains over the last four decades, while wages have stagnated is ignored.  Unregulated capitalism can be unfair.

The writer concludes with two assessments, both unsupported: 1) When you give someone something [they didn’t work for] you rob them of their dignity. 2) Socialism is taking your money against your will and shoving something down your throat that you never asked for. Are these assessments correct?

Socialism, according to the Oxford American Dictionary, is a political and economic theory of social organization that advocates that the means of production, distribution, and exchange should be owned by the community as a whole.  “Taking your money against your will,” happens in all political systems that levy taxes.  Laws necessarily impose obligations that “you never asked for.” But only complete lawless anarchy would avoid government “shoving something down your throat.”

It’s true that under Socialism, many people get things that they never worked for. We forget that in our system that is also true for all of us. I never worked for my public school education, and at $187 a quarter my college at OSU was obviously heavily subsidized. I never worked for the right and privilege to make my home anywhere in these United States I choose to. I earned the money for my 1957 Ford custom, but I didn’t pay anything close to the cost of maintaining the roads it traveled.  My right to own and enjoy all of my possessions, my various homes, businesses, and later investments all were secured for me long before I was born.

The point is this: we don’t live in a purely capitalist system, and we never did. Neither do we live in a purely socialist system.  The genius of American Democracy is that it strikes a balance. We believe that every human is imbued with certain inalienable rights at birth. The values we hold sacrosanct are enshrined in the Declaration of Independence and the US Constitution.  Our government is established around these values and derives its power from those it governs.

Both of the viral emails I have analyzed here are propaganda.  They are written to advance a political point of view — one that is not supported by high principles, or good thinking. Like all propaganda, it appeals to emotion, not reason.  It does not stand up to critical thinking.