No, it wasn’t a snarky tweet. But neither was it a letter actually composed by him. I’m a former marketing professional and I know the craft when I see it.  This was artful wordsmithing by pros who test and tweak every phrase for maximum effect. Their goal is to bring in contributions, not inform and certainly not garner advice from “a handful of grassroots activists like [me].” 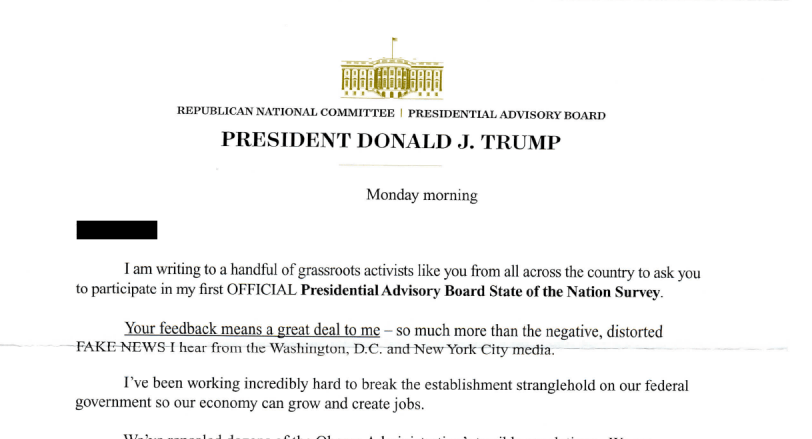 Now, if you have been paying any attention to how the president speaks – the words he uses, his grammar, his personal style – you know this three-page tome is not his own work.  But it is an elaborate con worthy of his signature. The folks who built this campaign knew that most of those who get the letter will find it both credible and motivating.

It reminds me of a hard-working man I knew. He’d started as an unskilled laborer and worked into a foreman’s job. He position got him a desk on the shop floor, though he rarely spent time at it. Over that desk, he proudly posted a certificate issued by the National Geographic Society which in florid prose proclaimed him to have been elected to membership in the society. He didn’t seem to know or care that all those who subscribe to the magazine receive such a certificate. He believed he was being recognized.

Millions have received the same GOP letter as I. This is no select group, and I doubt the President gives a fig for the advice of “Presidential Advisory Board.”

The letter included a questionnaire. As a market researcher, I recognize this too is a fraud. We used to call it “asking answers” because each question is phrased to elicit a particular answer from the targeted respondent. It’s intended to motivate check writing. Trumpists will give predictable answers that affirm their allegiance.  See for yourself: 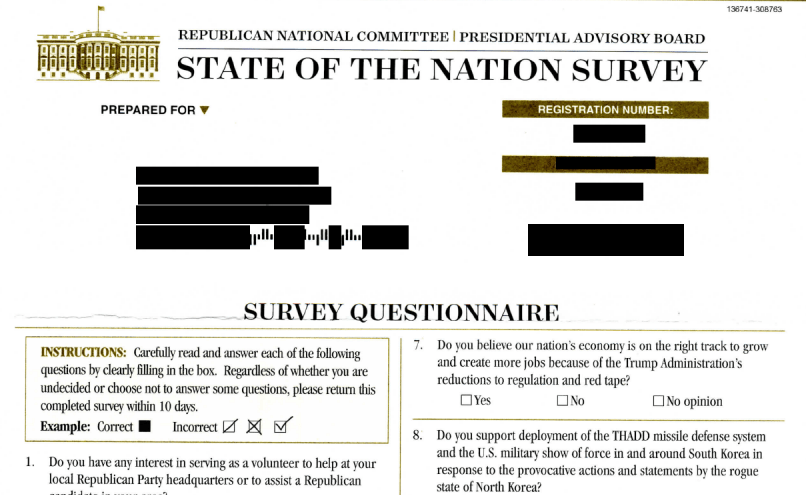 When I get stuff like this I’m put off by the con and insulted by the assumption that I’d buy in and send a check. Yet I can see that a certain self-important sort of person who had faith in the GOP would actually find nothing wrong and be flattered to have been selected. That is who backs our President.