Viral email messages, a stealth tool in political motivation, abound during political campaigns. I collect them as samples of propaganda because they are so blatant that they make good examples when I want to talk about critical thinking. The same propaganda techniques are widely used in popular media, especially MSN and Fox News — they are just more nuanced.

So in this post I wanted to deconstruct a viral email that is circulating among conservatives. 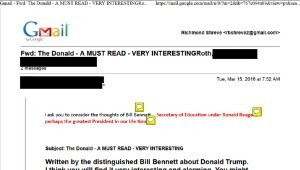 I have redacted the email names but othewise what you see is what I pulled from my gmail inbox.

Click the image to view the actual PDF file. I have added notes which you can point to and read and I’ve highlighted certain words and phrases that triggered my skepticism.

My aim is to show readers how easy it is to spot inauthentic information, and deliberate dis-information if you train your eye.

The first thing you will notice about the item is the very large font and the use of red type. The sender uses all-caps in the subject and the phrase “a must read”.  So from the outset, there’s lots of hype; and that’s often a signal that it’s not credible.  The body text repeats both the words and the emphasis and tells us that the author is a very important, educated, and credible source … at least if you are a fan of conservative opinion. But the adjectives are too over blown and the sender’s evident need to promote the author triggers my skepticism.

Reading further, the use of common clichés leads me to suspect that this writing is not the work of a high profile PhD affiliated with a scholarly think-tank like Heritage Foundation.  The overuse of absolutes like “all”, and “never” begs credibility as well.

The further down the page you get, the more the language sounds like a rant. The writer uses certain phrases as if they were well accepted and shared by the reader. Among  like-minded people already wedded to his point of view, those phrases would have special meaning. For insiders the language is familiar and evokes a belief, for outsiders it sounds oddly dogmatic. The “us” versus “them” mindset pervades the piece. It smacks of conspiracy paranoia.

After reading it through I noted that there were no actual facts or verifiable examples to support the writer’s assertions or speculation. It could not have been authored by Bennett or anyone else of his education and experience.  Sure enough, a quick web search revealed that Snopes had discredited the item long ago. The PDF has live links to fact checking commentary. Bennett did not write it, and actually contradicted it in an interview. But most of you probably guessed that it was bogus without fact-checking or even finishing the article.